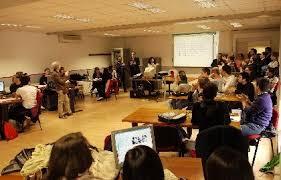 On the 26th of March 2014, the three students belonging to the classroom IV A who qualified for the first step on the 19th of February took part in the provincial  contest "Management Game 2014".

Alessandro Amoruso, Jacopo Bazzaro and Federico Mari played versus the students belonging to other seven schools from Milan, all running to gain the final regional step of the contest.

The Management Game which is held by the Assolombarda's Group of Young Entrepreneurs used a software to simulate a "business start-up", this year 75 schools from Milan were involved, 647 teams and 2.588 students took part in the contest.

The game aims at stimulating the students' critical thinking, their ability to make decisions, to study the market's figures as well as analyzing the outcomes, the different communications skills and the “team building”  which are very important at an organizational level.

The provincial contest was divided into three rounds lasting one hour each and at the end of each round the students could see their opponents' position that was calculated according to the company's “shareholders' cumulated profit”.

All the teams, accompanied by a teacher, were highly competitive.

Our students, Alessandro, Jacopo and Federico at the end of the first round realized they had made a strategic mistake related to the production investments so they had  to recover their lost positions and they were finally ranked in the fifth place out of eight teams: the winner of the Provinvial Contest was the Vittorini Scientifc High School.